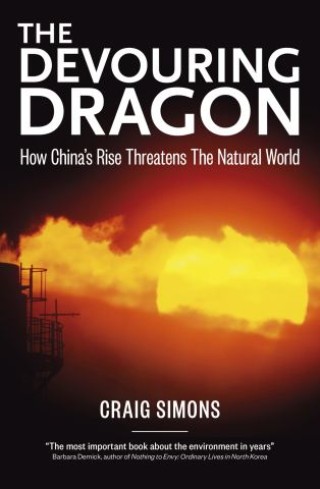 For this brilliant book, author Craig Simons visited many of the places and spoke to many of the people impacted by China’s explosive economic growth and voracious appetite for resources. From New Guinea, where great forests are being felled and rare birds threatened to meet China’s demand for timber; through Brazil, where large swaths of the Amazon are being cleared to plant soybeans for China, and India, where poachers are hunting and killing tigers and other endangered animals to extinction to feed Chinese demand; to Australia, where the countryside is being polluted by mines that supply coal to China, this study paints a devastating portrait of the many communities being ravaged to satisfy Chinese consumption. The Devouring Dragon looks at how an ascending China has rapidly surpassed the United States and Europe as the worst-polluting superpower and asks questions that demand urgent answers if the environment is to survive.

Craig Simons is the former Asia bureau chief for Cox Newspapers and a former China correspondent for Newsweek. He has also written for Backpacker magazine, the New York Times, Outside magazine, and the Wall Street Journal. He is a former Knight Science Journalism Fellow at the Massachusetts Institute of Technology and a former public policy scholar at the China Environmental Forum. He lives in Beijing.