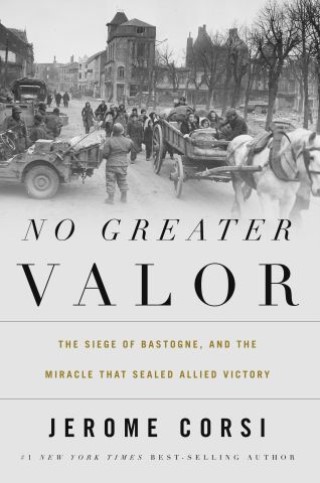 The Siege of Bastogne and the Miracle That Sealed Allied Victory

Jerome Corsi’s newest opus, No Greater Valor, examines the Siege of Bastogne—one of the most heroic victories of WWII—with a focus on the surprising faith of the Americans who fought there.

In December of 1944, an outmanned, outgunned, and surrounded US force fought Hitler’s overwhelming Panzer divisions to a miraculous standstill at Bastogne. The underdogs had saved the war for the Allies. It was nothing short of miraculous.

Corsi’s analysis is based on a record of oral histories along with original field maps used by field commanders, battle orders, and other documentation made at the time of the military command. With a perspective gleaned from newspapers, periodicals, and newsreels of the day, Corsi paints a riveting portrait of one of the most important battles in world history.

Jerome R. Corsi, Ph.D., is coauthor of Unfit for Command and author of The Obama Nation, both #1 New York Times bestsellers. Since 2004, Dr. Corsi has written six New York Times bestsellers on subjects including presidential politics, the economy, and Iran. He has appeared on Fox News, Fox Business, and MSNBC, as well as in hundreds of radio interviews. Dr. Corsi, who received his Ph.D. from the Department of Government at Harvard University in 1972, is a senior staff reporter with WND.com.