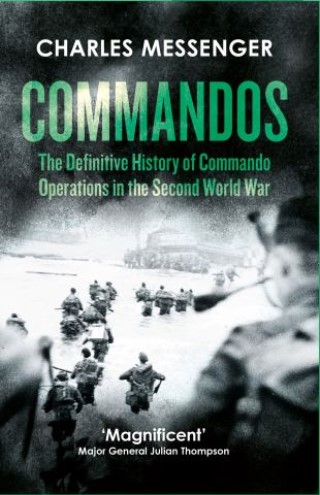 Commandos: The Definitive History of Commando Operations in the Second World War

The definitive and thrilling history of those who wore the famous green beret.COMMANDO is the definitive history of the units raised to answer Winston Churchill’s call to arms: ‘Enterprises much be prepared with specially trained troops of the hunter class, who can develop a reign of terror.’ These units and their courageous operations would take many forms, including the spectacular assaults of the Small Scale Raiding Force, No. 30 Commando’s shadowy intelligence-gathering, and the highly secret missions of ‘X’ Troop.Acclaimed military historian Charles Messenger follows these elite forces from the snowy wastes of Norway to the jungles of South-East Asia, from North Africa and Operation Torch to the Normandy beaches and Operation Overlord. The result, based on extensive research as well as interviews and correspondence with former Commandos, is the true and thrilling story of those who wore the famous green beret.

Charles Messenger: Charles Messenger served for nineteen years as a Regular officer and thirteen years as a Territorial in the Royal Tank Regiment. He has written over forty books on historical and defence matters, including a number on the two world wars. He has carried out several historical analysis studies for MOD and has written and helped direct a number of TV documentary series. He lectures widely and is an occasional battlefield guide. He is a member of the Army Records Society, the British Commission for Military History and the Society for Army Historical Research.