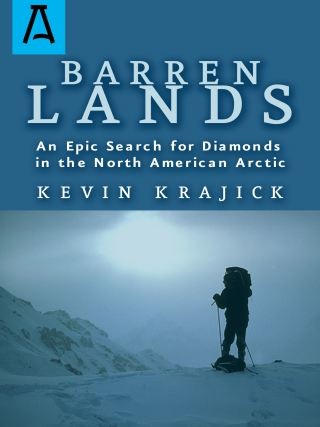 An Epic Search for Diamonds in the North America Arctic

First published in 2001, Barren Lands is the classic true story of the men who sought—and found—a great diamond mine on the last frontier of the far north. From a bloody 18th-century trek across the Canadian tundra to the daunting natural forces facing protagonists Chuck Fipke and Stewart Blusson as they struggle against the mighty DeBeers cartel, this is the definitive account of one of the world’s great mineral discoveries. Combining geology, science history, raw nature, and high intrigue, it is also a tale of supreme adventure, taking the reader into a magical—and now fast-vanishing—wild landscape. Now in a newly revised and updated edition.

Kevin Krajick:
Kevin Krajick has reported from dozens of countries for The New Yorker, National Geographic, Newsweek, Science, and many other publications. He was a finalist for the National Magazine Award for Public Service, and is two-time winner of the American Geophysical Union’s Walter Sullivan Award for Excellence in Science Journalism. He lives in New York City with his wife and daughters.