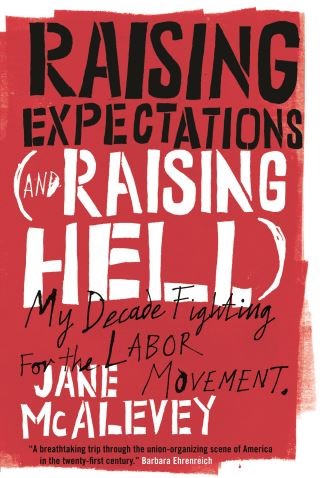 A real-life Norma Rae on the catastrophic state of the American union movement.

In 1995, in the first contested election in the history of the AFL-CIO, John Sweeney won the presidency of the nation’s largest labor federation, promising renewal and resurgence. Today, less than 7 percent of American private-sector workers belong to a union, the lowest percentage since the beginning of the twentieth century, and public employee collective bargaining has been dealt devastating blows in Wisconsin and elsewhere. What happened? Jane McAlevey is famous—and notorious—in the American labor movement as the hard-charging organizer who racked up a string of victories at a time when union leaders said winning wasn’t possible. Then she was bounced from the movement, a victim of the high-level internecine warfare that has torn apart organized labor. In this engrossing and funny narrative—that reflects the personality of its charismatic, wisecracking author—McAlevey tells the story of a number of dramatic organizing and contract victories, and the unconventional strategies that helped achieve them. Raising Expectations (and Raising Hell) argues that labor can be revived, but only if the movement acknowledges its mistakes and fully commits to deep organizing, participatory education, militancy, and an approach to workers and their communities that more resembles the campaigns of the 1930s—in short, social movement unionism that involves raising workers’ expectations (while raising hell).