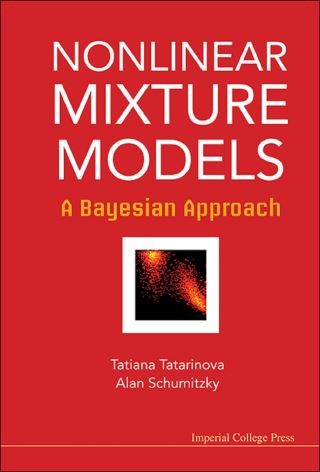 This book, written by two mathematicians from the University of Southern California, provides a broad introduction to the important subject of nonlinear mixture models from a Bayesian perspective. It contains background material, a brief description of Markov chain theory, as well as novel algorithms and their applications. It is self-contained and unified in presentation, which makes it ideal for use as an advanced textbook by graduate students and as a reference for independent researchers. The explanations in the book are detailed enough to capture the interest of the curious reader, and complete enough to provide the necessary background material needed to go further into the subject and explore the research literature.

In this book the authors present Bayesian methods of analysis for nonlinear, hierarchical mixture models, with a finite, but possibly unknown, number of components. These methods are then applied to various problems including population pharmacokinetics and gene expression analysis. In population pharmacokinetics, the nonlinear mixture model, based on previous clinical data, becomes the prior distribution for individual therapy. For gene expression data, one application included in the book is to determine which genes should be associated with the same component of the mixture (also known as a clustering problem). The book also contains examples of computer programs written in BUGS. This is the first book of its kind to cover many of the topics in this field.