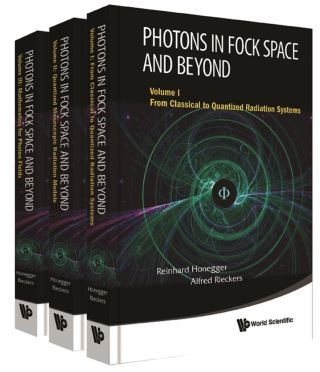 Photons In Fock Space And Beyond (In 3 Volumes)

The three-volume major reference “Photons in Fock Space and Beyond” undertakes a new mathematical and conceptual foundation of the theory of light emphasizing mesoscopic radiation systems. The quantum optical notions are generalized beyond Fock representations where the richness of an infinite dimensional quantum field system, with its mathematical difficulties and theoretical possibilities, is fully taken into account. It aims at a microscopic formulation of a mesoscopic model class which covers in principle all stages of the generation and propagation of light within a unified and well-defined conceptual frame.

The dynamics of the interacting systems is founded — according to original works of the authors — on convergent perturbation series and describes the developments of the quantized microscopic as well as the classical collective degrees of freedom at the same time. The achieved theoretical unification fits especially to laser and microwave applications inheriting objective information over quantum noise.

A special advancement is the incorporation of arbitrary multiply connected cavities where ideal conductor boundary conditions are imposed. From there arises a new category of classical and quantized field parts, apparently not treated in Quantum Electrodynamics before. In combination with gauge theory, the additional “cohomological fields” explain topological quantum effects in superconductivity. Further applications are to be expected for optoelectronic and optomechanical systems.