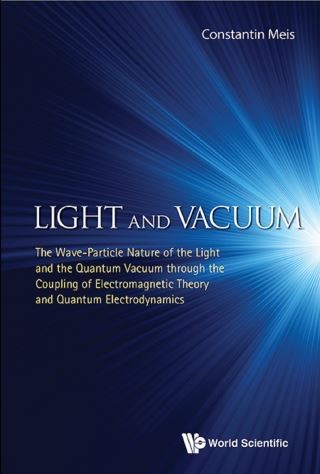 Light And Vacuum: The Wave-particle Nature Of The Light And The Quantum Vacuum Through The Coupling Of Electromagnetic Theory And Quantum Electrodynamics

Light and Vacuum presents a synthesis of selected fundamental topics of electromagnetic wave theory and quantum electrodynamics (QED) and analyzes the main theoretical difficulties encountered to ensure a coherent mathematical description of the simultaneous wave–particle nature of light, put in evidence by the experiments. The notion and the role of the quantum vacuum, strongly related to light, are extensively investigated.

Classical electrodynamics issued from Maxwell's equations revealed the necessity of introducing the notion of volume for an electromagnetic wave to stand entailing precise values of cut-off wavelengths to account for the shape and dimensions of the surrounding space. Conversely, in QED, light is considered to be composed of point particles disregarding the conceptual question on how the frequency of oscillating electric and magnetic fields may be attributed to a point particle.

To conciliate these concepts, the book provides a comprehensive overview of the author's work, including innovative contributions on the quantization of the vector potential amplitude at a single photon state, the non-local simultaneous wave–particle mathematical representation of the photon and finally the quantum vacuum. The purpose of the advanced elaborations is to raise questions, give hints and answers, and finally aspire for further theoretical and experimental studies in order to improve our knowledge and understanding on the real essence of Light and Vacuum.

Contents:
Readership: This book is recommended for advanced postgraduate students and researchers who are interested in Quantum Mechanics and Electrodynamics.
Key Features: