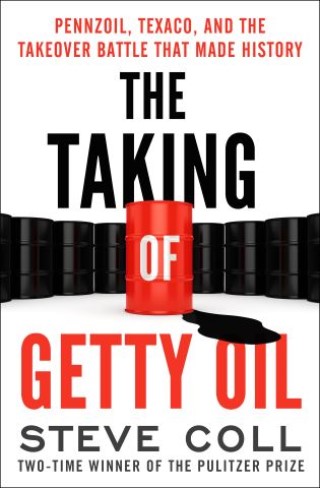 The Taking of Getty Oil

Pennzoil, Texaco, and the Takeover Battle That Made History

A larger-than-life account of family, greed, and a courtroom showdown between Big Oil rivals from the New York Times–bestselling author of Private Empire.

Pulitzer Prize–winning author Steve Coll is renowned for “his ability to take complicated, significant business stories and turn them into quick-reading engaging narratives” (Chicago Tribune). Coll is at the height of his talents in this “riveting” tale of one of the most spectacular—and catastrophic—corporate takeovers of all time (Newsday).

As the head of a sprawling oil empire, J. Paul Getty was once the world’s richest man. But by 1984, eight years after his death, Getty’s legacy was in tatters: His children were locked in a bitter feud over the family trust and the company he founded was riven by boardroom turmoil. Then Pennzoil made an agreement with Getty’s son, Gordon, to purchase Getty Oil. It was a done deal—until Texaco swooped in to claim the $10 billion prize.

What followed was an epic legal battle that pit “good ole boy” J. Hugh Liedtke of Pennzoil against the Wall Street brokers behind Texaco’s offer. The scandalous details of the case would shock the business world and change the landscape of the oil industry forever.

With a large cast of colorful characters and the dramatic pacing of a novel, The Taking of Getty Oil is a “suspenseful” and “always intriguing” chronicle of one of the most fascinating chapters in American corporate history (Publishers Weekly).

Steve Coll:
Steve Coll is a staff writer at the New Yorker, the dean of the Columbia Journalism School, and the bestselling author of seven books. Previously he served as president of the New America Foundation and worked for two decades at the Washington Post, where he won the Pulitzer Prize for Explanatory Journalism for a four-part series on the Securities and Exchange Commission during Ronald Reagan’s presidency. The award-winning series became the basis for Eagle on the Street (1991), coauthored with David A. Vise. Coll’s other books include New York Times Notable Book The Deal of the Century (1998); Ghost Wars (2004), winner of the Pulitzer Prize for General Nonfiction; The Bin Ladens (2009), winner of the PEN/John Kenneth Galbraith Award for Nonfiction; and Private Empire (2012), winner of the Financial Times and McKinsey Business Book of the Year Award.