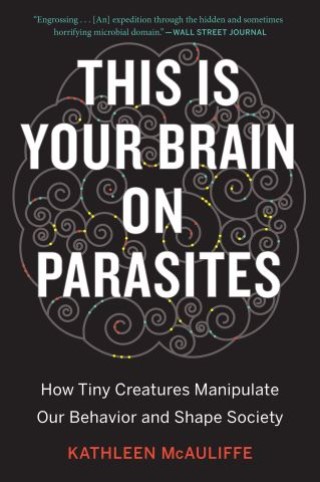 This Is Your Brain on Parasites

How Tiny Creatures Manipulate Our Behavior and Shape Society

A riveting investigation of the myriad ways that parasites control how creatures—including humans—act, feel, and think

Kathleen McAuliffe:
KATHLEEN MCAULIFFE is a contributing editor to Discover. Her work has appeared in over a dozen national magazines, including Discover, the New York Times Magazine, Atlantic, and Smithsonian. From 1999 to 2006, she was also a health columnist for More. Her work has been published in Best American Science Writing, and has received several grants and awards, including a science writing fellowship from the Marine Biological Laboratory at Woods Hole. She has appeared numerous times on TV and radio, and was interviewed by To the Point, the nationally syndicated Osgood FIle, and other programs after her 2012 Atlantic feature "How Your Cat Is Making You Crazy" became the second most widely read article in the magazine's history. McAuliffe lives in Miami with her husband—a research physicist—and her two children.