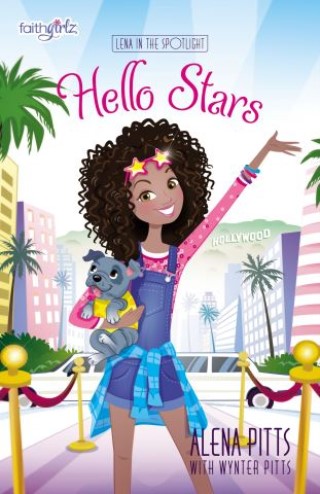 Hello Stars is book one in the Faithgirlz series titled Lena in the Spotlight, written by Alena Pitts, star of The War Room and tween blogger of For Girls Like You, and co-written with her mother, editor and author, Wynter Pitts It is a reflection of Alena’s own life experiences as she reaches for the stars and keeps her faith in balance.

In Hello Stars, eleven year old Lena Daniels never thought she’d get the chance star in a movie. Headstrong and determined, she has her life planned out to the minute. But when her best friends, Savannah and Emma, tell her about an audition, she knows there’s nothing else in the world she’d rather do. And now that she’s gotten her wish, Lena finds that being in the spotlight is harder than it sounds. Lena tackles tough choices, learns the value of perseverance, and keeps her hopes high. And she knows her faith and family will keep her feet on the ground and her eyes on the stars.

Alena Pitts is a young actress and model from Dallas, Texas.  As the oldest of four girls, Alena first cut her teeth in acting through making home videos and dramas with her sisters, using their entire home as their recording studio.  She has a natural love for all things creative which falls right in line with her gifts and talents. The Kendrick Brothers’ War Room marks Alena’s professional acting debut. With only school theater on her young resume, Alena jumped at a chance to audition for the role of Danielle Jordan. In addition to school and acting, Alena models and is a frequent contributor for the magazine For Girls Like You.

Wynter Pitts is the founder of For Girls Like You Magazine and the author of For Girls Like You: A Devotional for Tweens and You’re God’s Girl. The mother of four girls, Wynter’s mission is to empower and equip girls to walk boldly into becoming who God has created them to be and to provide parents with the resources and support needed to raise strong Christ followers. In addition to publishing the quarterly magazine, Wynter is a frequent blogger, a contributor for LifeWay’s ParentLife Magazine, and a public speaker. She is also the niece of Dr. Tony Evans. Wynter, her husband Jonathan, and four daughters (ages 6-11), reside in Dallas, Texas.