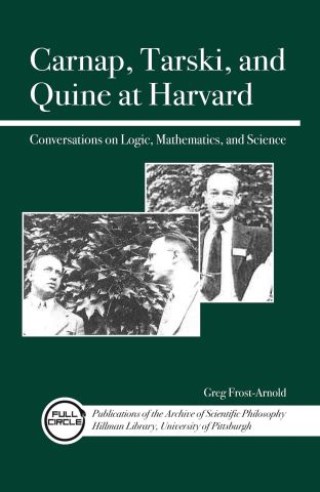 Carnap, Tarski, and Quine at Harvard

Conversations on Logic, Mathematics, and Science

During the academic year 1940-1941, several giants of analytic philosophy congregated at Harvard: Bertrand Russell, Alfred Tarski, Rudlof Carnap, W. V. Quine, Carl Hempel, and Nelson Goodman were all in residence. This group held regular private meetings, with Carnap, Tarski, and Quine being the most frequent attendees. Carnap, Tarski, and Quine at Harvard allows the reader to act as a fly on the wall for their conversations. Carnap took detailed notes during his year at Harvard. This book includes both a German transcription of these shorthand notes and an English translation in the appendix section. Carnap’s notes cover a wide range of topics, but surprisingly, the most prominent question is: if the number of physical items in the universe is finite (or possibly finite), what form should scientific discourse, and logic and mathematics in particular, take? This question is closely connected to an abiding philosophical problem, one that is of central philosophical importance to the logical empiricists: what is the relationship between the logico-mathematical realm and the material realm studied by natural science? Carnap, Tarski, and Quine’s attempts to answer this question involve a number of issues that remain central to philosophy of logic, mathematics, and science today. This book focuses on three such issues: nominalism, the unity of science, and analyticity. In short, the book reconstructs the lines of argument represented in these Harvard discussions, discusses their historical significance (especially Quine’s break from Carnap), and relates them when possible to contemporary treatments of these issues.

Nominalism. The founding document of twentieth-century Anglophone nominalism is Goodman and Quine’s 1947 Steps Toward a Constructive Nominalism.” In it, the authors acknowledge that their project’s initial impetus was the conversations of 1940-1941 with Carnap and Tarski. Frost-Arnold's exposition focuses upon the rationales given for and against the nominalist program at its inception. Tarski and Quine’s primary motivation for nominalism is that mathematical sentences will be unintelligible’ or meaningless, and thus perniciously metaphysical, if (contra nominalism) their component terms are taken to refer to abstract objects. Their solution is to re-interpret mathematical language so that its terms only refer to concrete entitiesand if the number of concreta is finite, then portions of classical mathematics will be considered meaningless. Frost-Arnold then identifies and reconstructs Carnap’s two most forceful responses to Tarski and Quine’s view: (1) all of classical mathematics is meaningful, even if the number of concreta is finite, and (2) nominalist strictures lead to absurd consequences in mathematics and logic. The second is familiar from modern debates over nominalism, and its force is proportional to the strength of one’s commitment to preserving all of classical mathematics. The first, however, has no direct correlate in the modern debate, and turns upon the question of whether Carnap’s technique for partially interpreting a language can confer meaningfulness on the whole language. Finally, the author compares the arguments for and against nominalism found in the discussion notes to the leading arguments in the current nominalist debate: the indispensability argument and the argument from causal theories of reference and knowledge.

Analyticity. Carnap, Tarski, and Quine’s conversations on finitism have a direct connection to the tenability of the analytic-synthetic distinction: under a finitist-nominalist regime, portions of arithmetica supposedly analytic enterprisebecome empirical. Other portions of the 1940-41 notes address analyticity directly. Interestingly, Tarski’s criticisms are more sustained and pointed than Quine’s. For example, Tarski suggests that Gödel’s first incompleteness theorem furnishes evidence against Carnap’s conception of analyticity. After reconstructing this argument, Frost-Arnold concludes that it does not tell decisively against Carnapprovided that language is not treated fundamentally proof-theoretically. Quine’s points of disagreement with Carnap in the discussion notes are primarily denials of Carnap’s premises without argument. They do, however, allow us new and more precise characterizations of Carnap and Quine’s differences. Finally, the author forwards two historical conjectures concerning the radicalization of Quine’s critique of analyticity in the period between Truth by Convention” and Two Dogmas.” First, the finitist conversations could have shown Quine how the apparently analytic sentences of arithmetic could be plausibly construed as synthetic. Second, Carnap’s shift during his semantic period toward intensional analyses of linguistic concepts, including synonymy, perhaps made Quine, an avowed extensionalist, more skeptical of meaning and analyticity.

Unity of Science. The unity of science movement originated in Vienna in the 1920s, and figured prominently in the transplantation of logical empiricism into North America in the 1940s. Carnap, Tarski, and Quine’s search for a total language of science that incorporates mathematical language into that of the natural and social sciences is a clear attempt to unify the language of science. But what motivates the drive for such a unified science? Frost-Arnold locates the answer in the logical empiricists’ antipathy towards speculative metaphysics, in contrast with meaningful scientific claims. I present evidence that, for logical empiricists over several decades, an apparently meaningful assertion or term is metaphysical if and only if that assertion or term cannot be incorporated into a language of unified science. Thus, constructing a single language of science that encompasses the mathematical and natural domains would ensure that mathematical entities are not on par with entelechies and Platonic Forms. The author explores various versions of this criterion for overcoming metaphysics, focusing on Carnap and Neurath. Finally, I consider an obstacle facing their strategy for overcoming metaphysics: there is no effective procedure to show that a given claim or term cannot be incorporated within a language.