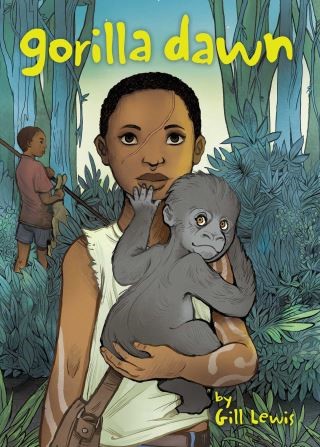 Imara and Bobo are two children living with a band of rebel soldiers in the African jungle. When an orphaned gorilla is brought to their camp they swear to protect it. But in their war-ravaged world, can they ever find true safety?

Deep in the heart of the Congo, a baby gorilla is captured by a group of rebel soldiers. Imara and Bobo are also prisoners in the rebels’ camp. When they learn that the gorilla will be sold into captivity, they swear to return it to the wild before it’s too late. But the consequences of getting caught are too terrible to think about. Will the bond between the gorilla and the children give them the courage they need to escape?

Gill Lewis: Gill Lewis is the author of the critically acclaimed Wild Wings and One White Dolphin, both winners of the Green Earth Book Award, as well as Moon Bear, Gorilla Dawn, and Scarlet Ibis. A veterinarian, her love of animals and the natural world plays a big part in her writing. She lives in the UK.