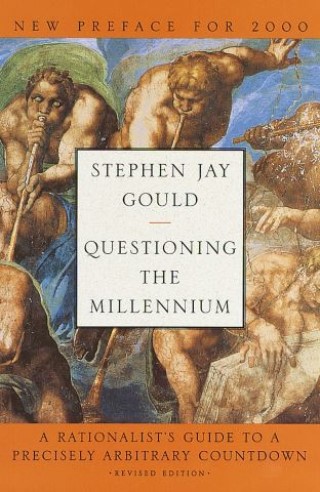 A Rationalist's Guide to a Precisely Arbitrary Countdown

In this new edition of Questioning the Millennium, best-selling author Stephen Jay Gould applies his wit and erudition to one of today's most pressing subjects: the significance of the millennium.

In 1950 at age eight, prompted by an issue of Life magazine marking the century's midpoint, Stephen Jay Gould started thinking about the approaching turn of the millennium. In this beautiful inquiry into time and its milestones, he shares his interest and insights with his readers. Refreshingly reasoned and absorbing, the book asks and answers the three major questions that define the approaching calendrical event. First, what exactly is this concept of a millennium and how has its meaning shifted? How did the name for a future thousand-year reign of Jesus Christ on earth get transferred to the passage of a secular period of a thousand years in current human history? When does the new millennium really begin: January 1, 2000, or January 1, 2001? (Although seemingly trivial, the debate over this issue tells an intriguing story about the cultural history of the twentieth century.) And why must our calendars be so complex, leading to our search for arbitrary regularity, including a fascination with millennia? This revised edition begins with a new and extensive preface on a key subject not treated in the original version.

As always, Gould brings into his essays a wide range of compelling historical and scientific fact, including a brief history of millennial fevers, calendrical traditions, and idiosyncrasies from around the world; the story of a sixth-century monk whose errors in chronology plague us even today; and the heroism of a young autistic man who has developed the extraordinary ability to calculate dates deep into the past and the future.

Ranging over a wide terrain of phenomena--from the arbitrary regularities of human calendars to the unpredictability of nature, from the vagaries of pop culture to the birth of Christ--Stephen Jay Gould holds up the mirror to our millennial passions to reveal our foibles, absurdities, and uniqueness--in other words, our humanity.

Stephen Jay Gould: Stephen Jay Gould was one of the most influential evolutionary biologists and most acclaimed science essayists of the 20th century. He died in May 2002. He was the author of numerous books, including The Lying Stones of Marrakech and Questioning the Millennium.