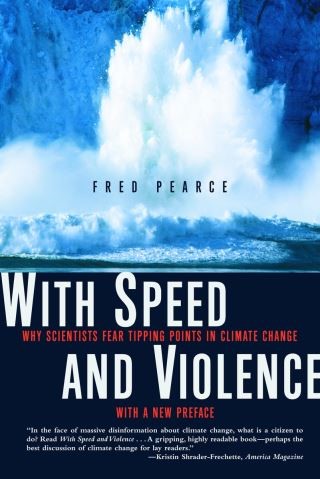 With Speed and Violence

Nature is fragile, environmentalists often tell us. But the lesson of this book is that it is not so. The truth is far more worrying. Nature is strong and packs a serious counterpunch . . . Global warming will very probably unleash unstoppable planetary forces. And they will not be gradual. The history of our planet's climate shows that it does not do gradual change. Under pressure, whether from sunspots or orbital wobbles or the depredations of humans, it lurches-virtually overnight. —from the Introduction

Fred Pearce has been writing about climate change for eighteen years, and the more he learns, the worse things look. Where once scientists were concerned about gradual climate change, now more and more of them fear we will soon be dealing with abrupt change resulting from triggering hidden tipping points. Even President Bush's top climate modeler, Jim Hansen, warned in 2005 that "we are on the precipice of climate system tipping points beyond which there is no redemption."

As Pearce began working on this book, normally cautious scientists beat a path to his door to tell him about their fears and their latest findings. With Speed and Violence tells the stories of these scientists and their work-from the implications of melting permafrost in Siberia and the huge river systems of meltwater beneath the icecaps of Greenland and Antarctica to the effects of the "ocean conveyor" and a rare molecule that runs virtually the entire cleanup system for the planet.

Above all, the scientists told him what they're now learning about the speed and violence of past natural climate change-and what it portends for our future. With Speed and Violence is the most up-to-date and readable book yet about the growing evidence for global warming and the large climatic effects it may unleash.

Fred Pearce: Fred Pearce is environment consultant at New Scientist and a weekly columnist and investigative journalist for the Guardian. He has also written for Audubon, Popular Science, Time, theBoston Globe, and Natural History. His books include The Coming Population Crash, Confessions of an Eco-Sinner, With Speed and Violence, When the Rivers Run Dry, Keepers of the Spring, Turning Up the Heat, and Deep Jungle. Pearce lives in England.