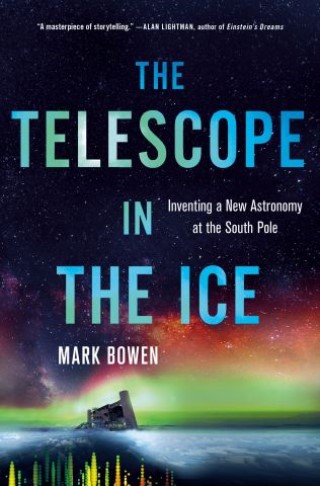 The Telescope in the Ice

Inventing a New Astronomy at the South Pole

IceCube Observatory, a South Pole instrument making the first actual observations of high-energy neutrinos, has been called the “weirdest” of the seven wonders of modern astronomy by Scientific American. In The Telescope in the Ice, Mark Bowen tells the amazing story of the people who built the instrument and the science involved.

Located near the U. S. Amundsen-Scott Research Station at the geographic South Pole, IceCube is unlike most telescopes in that it is not designed to detect light. It employs a cubic kilometer of diamond-clear ice, more than a mile beneath the surface, to detect an elementary particle known as the neutrino. In 2010, it detected the first extraterrestrial high-energy neutrinos and thus gave birth to a new field of astronomy.

IceCube is also the largest particle physics detector ever built. Its scientific goals span not only astrophysics and cosmology but also pure particle physics. And since the neutrino is one of the strangest and least understood of the known elementary particles, this is fertile ground. Neutrino physics is perhaps the most active field in particle physics today, and IceCube is at the forefront.

The Telescope in the Ice is, ultimately, a book about people and the thrill of the chase: the struggle to understand the neutrino and the pioneers and inventors of neutrino astronomy.

Mark Bowen: MARK BOWEN is a writer, physicist. He earned a bachelor’s degree and a doctorate in physics at MIT and worked for a decade in the medical industry. Bowen has written for Climbing, Natural History, Science, Technology Review, and AMC Outdoors. He is considered an adjunct member of AMANDA and IceCube, with full access. He lives in Vermont.