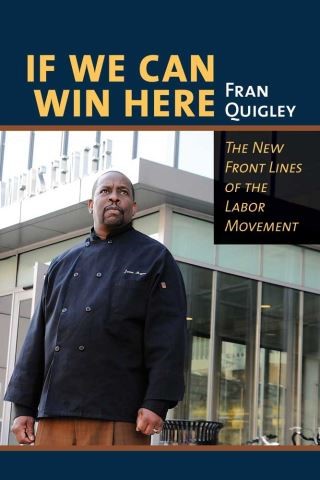 If We Can Win Here

The New Front Lines of the Labor Movement

Do service-sector workers represent the future of the U.S. labor movement? Mid-twentieth-century union activism transformed manufacturing jobs from backbreaking, low-wage work into careers that allowed workers to buy homes and send their kids to college. Some union activists insist that there is no reason why service-sector workers cannot follow that same path. In If We Can Win Here, Fran Quigley tells the stories of janitors, fry cooks, and health care aides trying to fight their way to middle-class incomes in Indianapolis. He also chronicles the struggles of the union organizers with whom the workers have made common cause.

The service-sector workers of Indianapolis mirror the city’s demographics: they are white, African American, and Latino. In contrast, the union organizers are mostly white and younger than the workers they help rally. Quigley chronicles these allies’ setbacks, victories, bonds, and conflicts while placing their journey in the broader context of the global economy and labor history. As one Indiana-based organizer says of the struggle being waged in a state that has earned a reputation as antiunion: "If we can win here, we can win anywhere." The outcome of the battle of Indianapolis may foretell the fate of workers across the United States.