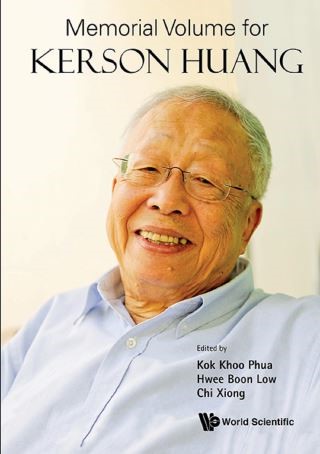 Professor Kerson Huang was a well respected theoretical physicist, who was also well versed in English and Chinese literature. He was born in Nanning, China, on 15 March 1928, and he was a fellow at the IAS, Princeton, from 1955–1957 before joining the faculty of MIT. He remained there until he retired from teaching in 1999. His research in theoretical physics included works on Bose–Einstein condensation and quantum field theory. In his long and illustrious career, Prof. Huang has worked with many prominent physicists. In 1957, he published a theory known as the hard-sphere model for Bose gases with Nobel Laureates Chen-Ning Yang and Tsung-Dao Lee. With Noble Laureate Steven Weinberg, he studied the ultimate temperature and the thermodynamics of early universe. While he was at Princeton, he also worked with atomic bomb developer J. Robert Oppenheimer. In recently years, Prof. Huang had been a visiting professor at Nanyang Technological University in Singapore, and worked on both biophysics and quantum cosmology.

This memorial volume is dedicated to Prof. Huang who passed away peacefully at home on September 1, 2016 at the age of 88. The volume features the recollections of Prof. Huang by his former colleagues and students, including Profs Chen-Ning Yang and Samuel Ting, as well as their reflections on Prof. Huang's achievements in the various subdivisions of physics.