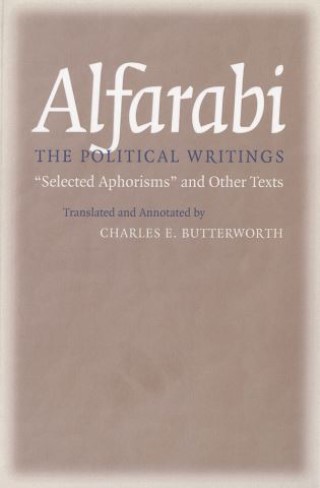 "Selected Aphorisms" and Other Texts

Alfarabi was among the first to explore the tensions between the philosophy of classical Greece and that of Islam, as well as of religion generally. His writings, extraordinary in their breadth and deep learning, have had a profound impact on Islamic and Jewish philosophy. This volume presents four of Alfarabi's most important texts, making his political thought available to classicists, medievalists, and scholars of religion and Byzantine and Middle Eastern studies.

In a clear prose translation by Charles E. Butterworth, these treatises provide a valuable introduction to the teachings of Alfarabi and to the development of Islamic political philosophy. All of these texts are based on new Arabic editions. Two—The Book of Religion and Harmonization of the Two Opinions of the Two Sages, Plato the Divine and Aristotle—appear in English for the first time. The translations of the other two works—Selected Aphorisms and chapter five of the Enumeration of the Sciences—differ markedly from those previously known to English-language readers.

Butterworth situates each essay in its historical, literary, and philosophical context. His notes help the reader follow Alfarabi's text and identify persons, places, and events. English-Arabic and Arabic-English glossaries of terms further assist the reader.