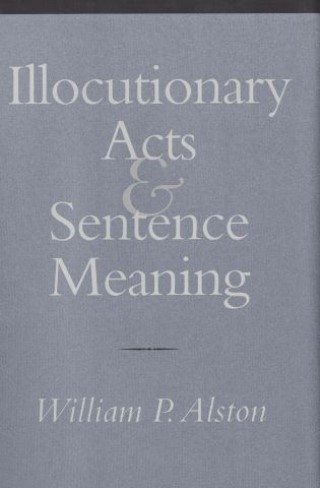 What is it for a sentence to have a certain meaning? This is the question that William P. Alston, one of America's most distinguished and prolific analytic philosophers, addresses in this major contribution to the philosophy of language. His answer focuses on the given sentence's potential to play the role that its speaker had in mind—what he terms the usability of the sentence to perform the illocutionary act intended by its speaker.

Alston defines an illocutionary act as an act of saying something with a certain "content." He develops his account of what it is to perform such acts in terms of taking responsibility, in uttering a sentence, for the existence of certain conditions. In requesting someone to open a window, for example, the speaker takes responsibility for its being the case that the window is closed and that the speaker has an interest in its being opened.

In providing detailed and explicit patterns of analysis for the whole range of illocutionary acts, Alston makes a unique contribution to the field of philosophy of language—one that is likely to generate debate for years to come.