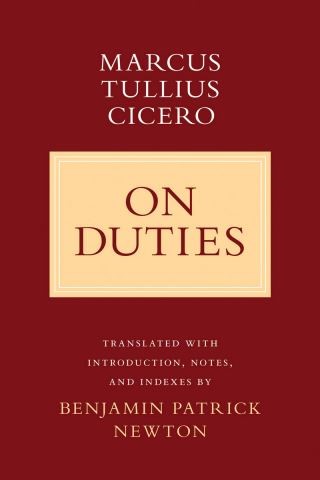 Benjamin Patrick Newton’s translation of Cicero’s On Duties is the most complete edition of a text that has been considered a source of moral authority throughout classical, medieval, and modern times. Marcus Tullius Cicero was a preeminent Roman statesman, orator, and philosopher who introduced philosophy into Rome, and through Rome, into Christendom and the modern world. On Duties was championed by important thinkers including Thomas Aquinas, Montesquieu, and Voltaire, and it was one of the earliest books printed on the Gutenberg press.

The true significance of On Duties lies in its examination of several fundamental problems of political philosophy, the most important being the possible conflict between the honorable and the useful. The honorable encompasses the virtues of human beings, which include justice and concern for the common good. The useful refers to the needs of living beings, which includes certain necessities and concern for private good. Only by understanding the possible conflict between these two sides of human nature, Cicero declares, may we understand our duties to our community and to ourselves. This new edition of On Duties aims to provide readers who cannot read Latin but wish to study the book with a literal yet elegant translation. It features an introduction, outline, footnotes, interpretative essay, glossary, and indexes, making Cicero’s thought accessible to a general audience.