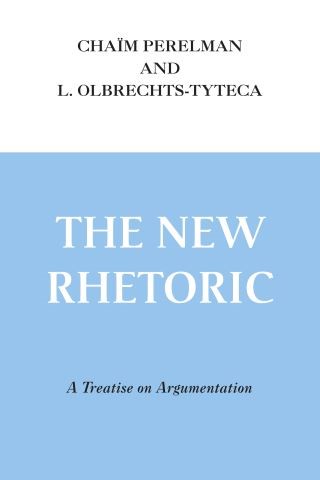 A Treatise on Argumentation

The New Rhetoric is founded on the idea that since “argumentation aims at securing the adherence of those to whom it is addressed, it is, in its entirety, relative to the audience to be influenced,” says Chaïm Perelman and L. Olbrechts-Tyteca, and they rely, in particular, for their theory of argumentation on the twin concepts of universal and particular audiences: while every argument is directed to a specific individual or group, the orator decides what information and what approaches will achieve the greatest adherence according to an ideal audience. This ideal, Perelman explains, can be embodied, for example, "in God, in all reasonable and competent men, in the man deliberating or in an elite.” Like particular audiences, then, the universal audience is never fixed or absolute but depends on the orator, the content and goals of the argument, and the particular audience to whom the argument is addressed. These considerations determine what information constitutes "facts" and "reasonableness" and thus help to determine the universal audience that, in turn, shapes the orator's approach. The adherence of an audience is also determined by the orator's use of values, a further key concept of the New Rhetoric. Perelman's treatment of value and his view of epideictic rhetoric sets his approach apart from that of the ancients and of Aristotle in particular. Aristotle's division of rhetoric into three genres–forensic, deliberative, and epideictic–is largely motivated by the judgments required for each: forensic or legal arguments require verdicts on past action, deliberative or political rhetoric seeks judgment on future action, and epideictic or ceremonial rhetoric concerns values associated with praise or blame and seeks no specific decisions. For Aristotle, the epideictic genre was of limited importance in the civic realm since it did not concern facts or policies. Perelman, in contrast, believes not only that epideictic rhetoric warrants more attention, but that the values normally limited to that genre are in fact central to all argumentation. "Epideictic oratory," Perelman argues, "has significant and important argumentation for strengthening the disposition toward action by increasing adherence to the values it lauds.” These values are central to the persuasiveness of arguments in all rhetorical genres since the orator always attempts to "establish a sense of communion centered around particular values recognized by the audience.”