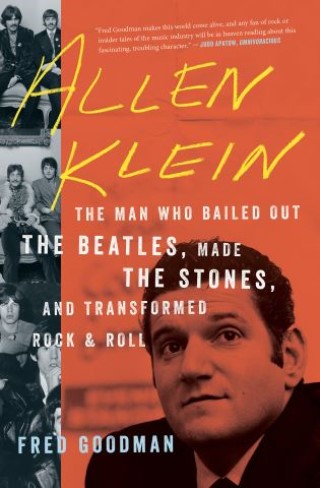 The Man Who Bailed Out the Beatles, Made the Stones, and Transformed Rock & Roll

The story of the notorious rock and roll manager, revealing new, behind-the-scenes details about some of the biggest bands in music history.

Allen Klein was like no one the music industry had seen before. Though he became infamous for allegedly causing the Beatles’ breakup and robbing the Rolling Stones, the truth is both more complex and more fascinating. As the manager of both groups—not to mention Sam Cooke, Pete Townshend, Donovan, The Kinks, and numerous others—he taught young soon-to-be legends how to be businessmen as well as rock stars.

While Klein made millions for his clients, he was as merciless with them as he was with anyone, earning himself an outsize reputation for villainy that has gone unchallenged until now. Through unique, unprecedented access to Klein’s archives, veteran music journalist Fred Goodman tells the full story of how the Beatles broke up, the Stones achieved the greatest commercial success in rock history, and the music business became what it is today.

“Fred Goodman makes this world come alive, and any fan of rock or insider tales of the music industry will be in heaven reading about this fascinating, troubling character.” —Judd Apatow

“Writing about contracts, percentages and deals can be tedious, but Goodman makes it as exciting as reading about an artist’s sex life. The book explodes with inside dope.” —Daily News (New York)

“Succeed[s] both as a compelling work of rock-’n’-roll history and as a cautionary business primer.” —The Wall Street Journal