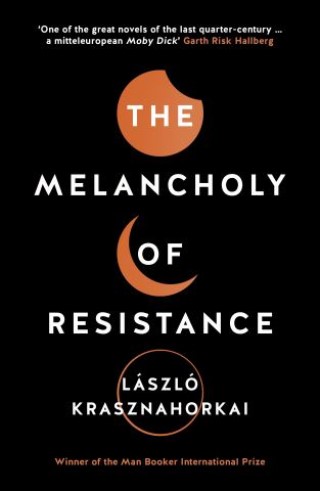 The Melancholy of Resistance

The Melancholy of Resistance, László Krasznahorkai's magisterial, surreal novel, depicts a chain of mysterious events in a small Hungarian town.

A circus, promising to display the stuffed body of the largest whale in the world, arrives in the dead of winter, prompting bizarre rumours. Word spreads that the circus folk have a sinister purpose in mind, and the frightened citizens cling to any manifestation of order they can find - music, cosmology, fascism.

The novel's characters are unforgettable: the evil Mrs. Eszter, plotting her takeover of the town; her weakling husband; and Valuska, our hapless hero with his head in the clouds, who is the tender centre of the book, the only pure and noble soul to be found.

Compact, powerful and intense, The Melancholy of Resistance, as its enormously gifted translator George Szirtes puts it, 'is a slow lava flow of narrative, a vast black river of type.' And yet, miraculously, the novel, in the words of Guardian, 'lifts the reader along in lunar leaps and bounds.'

L�szl� Krasznahorkai was born in Gyula, Hungary, in 1954. He has written five novels and won numerous prizes, including the International Man Booker Prize 2015, 2013 Best Translated Book Award in Fiction for Satantango, and 1993 Best Book of the Year Award in Germany for The Melancholy of Resistance.

For more about Krasznahorkai, visit his extensive website: http://www.krasznahorkai.hu/