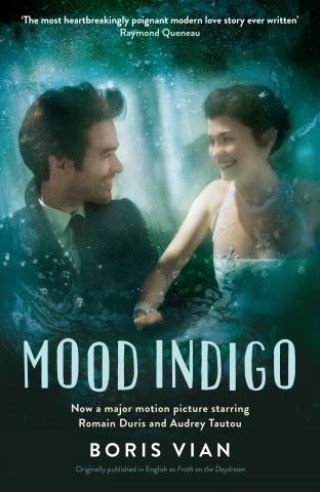 The world of Mood Indigo is a stained-glass cartoon kind of a place, where the piano dispenses cocktails, the kitchen mice dance to the sound of sunbeams, and the air is three parts jazz. Colin is a wealthy young aristocrat, a slim, innocent creature who loves easily. The instant he sees Chloe, bass drums thump inside his shirt, and soon the two are married. Typically generous, Colin gives a quarter of his fortune to his best friend Chick so he can marry Chloe's friend Alyssum.

But a lily grows in Chloe's lung, and Colin must spend his remaining fortune on the only available treatment: surrounding her daily with fresh flowers. Chick squanders his share of Colin's money on rare editions of Jean Pulse Heartre, and Alyssum decides her only recourse is to murder the philosopher whose books are ruining her husband. Chick and Colin's money woes force them to sacrifice their carefree lives to soul-crushing work, and even the suicidal mice wear themselves out trying to restore the lustre to the kitchen tiles.

Boris Vian: Boris Vian (1920-59) was a French writer, poet, musician, singer, translator, critic, actor, inventor and engineer. Best remembered for L'�cume des jours (translated into English by Stanley Chapman as Froth on the Daydream and renamed Mood Indigo to tie in with the film, starring Romain Duris and Audrey Tautou), Vian's work is characterised by the dazzling wordplay and surreal plots which made him a cult figure in 1960s France and beyond.