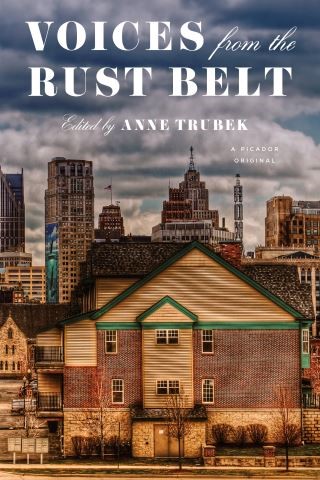 Voices from the Rust Belt

The essays in Voices from the Rust Belt "address segregated schools, rural childhoods, suburban ennui, lead poisoning, opiate addiction, and job loss. They reflect upon happy childhoods, successful community ventures, warm refuges for outsiders, and hidden oases of natural beauty. But mainly they are stories drawn from uniquely personal experiences: A girl has her bike stolen. A social worker in Pittsburgh makes calls on clients. A journalist from Buffalo moves away, and misses home.... A father gives his daughter a bath in the lead-contaminated water of Flint, Michigan" (from the introduction).

Where is America's Rust Belt? It's not quite a geographic region but a linguistic one, first introduced as a concept in 1984 by Walter Mondale. In the modern vernacular, it's closely associated with the "Post-Industrial Midwest," and includes Michigan, Ohio, and Pennsylvania, as well as parts of Illinois, Wisconsin, and New York. The region reflects the country's manufacturing center, which, over the past forty years, has been in decline. In the 2016 election, the Rust Belt's economic woes became a political talking point, and helped pave the way for a Donald Trump victory.

But the region is neither monolithic nor easily understood. The truth is much more nuanced. Voices from the Rust Belt pulls together a distinct variety of voices from people who call the region home. Voices that emerge from familiar Rust Belt cities—Detroit, Cleveland, Flint, and Buffalo, among other places—and observe, with grace and sensitivity, the changing economic and cultural realities for generations of Americans.

Anne Trubek: ANNE TRUBEK is the founder and director of Belt Publishing. She is the author of The History and Uncertain Future of Handwriting and A Skeptic’s Guide to Writers’ Houses, and the co-editor of Rust Belt Chic: The Cleveland Anthology.