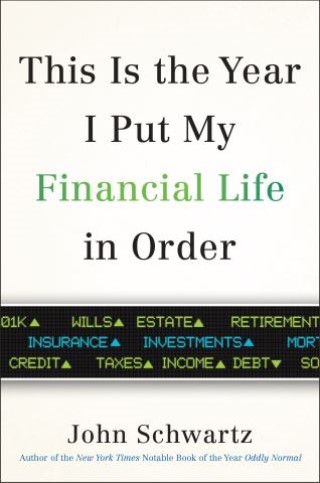 This is the Year I Put My Financial Life in Order

A New York Times correspondent shares his financial successes and mishaps, offering an everyman's guide to straightening out your money once and for all.

Money management is one of our most practical survival skills—and also one we've convinced ourselves we're either born with or not. In reality, financial planning can be learned, like anything else. Part financial memoir and part research-based guide to attaining lifelong security, This Is the Year I Put My Financial Life in Order is the book that everyone who has never wanted to read a preachy financial guide has been waiting for.

John Schwartz and his wife, Jeanne, are pre-retirement workers of an economic class well above the poverty line, but well below the one percent. Sharing his own alternately harrowing and hilarious stories—from his brush with financial ruin and bankruptcy in his thirties to his short-lived budgeted diet of cafeteria french fries and gravy—John will walk you through his own journey to financial literacy, which he admittedly started a bit late. He covers everything from investments to retirement and insurance to wills (at fifty-eight, he didn't have one!), medical directives and more. Whether you're a college grad wanting to start out on the right foot or you're approaching retirement age and still wondering what a 401(K) is, This Is the Year I Put My Financial Life in Order will help you become your own best financial adviser.

John Schwartz: John Schwartz is a reporter at The New York Times, where he has written about science, business, law and many other topics that have taken him from the Mojave Desert to Moscow, and from Nanjing to Nashville; he has explored the devastation of New Orleans after Hurricane Katrina, tumbled in zero gravity, flown a jetpack, and reported stories from river dredges, helicopters and sewers. He also writes a humor column on investing for the Times. A native of Galveston, Texas, John is married to Jeanne Mixon, his college sweetheart. They have three children.