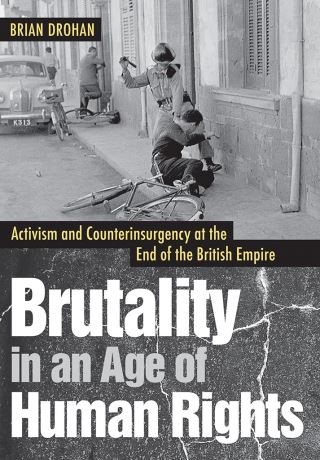 Brutality in an Age of Human Rights

Activism and Counterinsurgency at the End of the British Empire

In Brutality in an Age of Human Rights, Brian Drohan demonstrates that British officials’ choices concerning counterinsurgency methods have long been deeply influenced or even redirected by the work of human rights activists. To reveal how that influence was manifested by military policies and practices, Drohan examines three British counterinsurgency campaigns—Cyprus (1955–1959), Aden (1963–1967), and the peak of the "Troubles" in Northern Ireland (1969–1976). This book is enriched by Drohan’s use of a newly available collection of 1.2 million colonial-era files, International Committee of the Red Cross files, the extensive Troubles collection at Linen Hall Library in Belfast, and many other sources.

Drohan argues that when faced with human rights activism, British officials sought to evade, discredit, and deflect public criticism of their actions to avoid drawing attention to brutal counterinsurgency practices such as the use of torture during interrogation. Some of the topics discussed in the book, such as the use of violence against civilians, the desire to uphold human rights values while simultaneously employing brutal methods, and the dynamic of wars waged in the glare of the media, are of critical interest to scholars, lawyers, and government officials dealing with the conflicts in Iraq and Afghanistan, and those to come in the future.