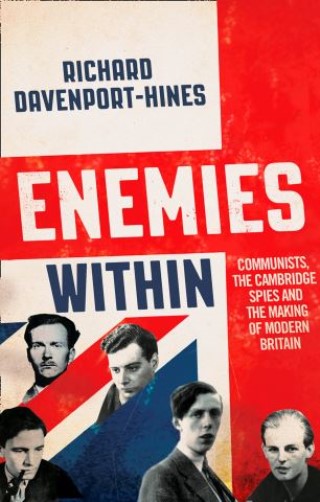 Enemies Within: Communists, the Cambridge Spies and the Making of Modern Britain

What pushed Blunt, Burgess, Cairncross, Maclean and Philby into Soviet hands?With access to recently released papers and other neglected documents, this sharp analysis of the intelligence world examines how and why these men and others betrayed their country and what this cost Britain and its allies.Enemies Within is a new history of the influence of Moscow on Britain told through the stories of those who chose to spy for the Soviet Union. It also challenges entrenched assumptions about abused trust, corruption and Establishment cover-ups that began with the Cambridge Five and the disappearance of Guy Burgess and Donald Maclean on the night boat to Saint-Malo in 1951.In a book that is as intellectually thrilling as it is entertaining and illuminating, Richard Davenport-Hines traces the bonds between individuals, networks and organisations over generations to offer a study of character, both individual and institutional. At its core lie the operative traits of boarding schools, the universities of Oxford and Cambridge, the Intelligence Division, Foreign Office, MI5, MI6 and Moscow Centre.Davenport-Hines tells many stories of espionage, counter-espionage and treachery. With its vast cope, ambition and scholarship, Enemies Within charts how the undermining of authority, the rejection of expertise and the suspicion of educational advantages began, and how these have transformed the social and political temper of modern Britain.

Richard Davenport-Hines: Richard Davenport-Hines won the Wolfson Prize for History for his first book, ‘Dudley Docker’. He is an adviser to the ‘Oxford Dictionary of National Biography’ and has also written biographies of W.H. Auden and Marcel Proust. His most recent book, ‘An English Affair’ was published in 2013. A Fellow of the Royal Historical Society and the Royal Society of Literature, he reviews for the Sunday Telegraph, the Sunday Times and the Times Literary Supplement.