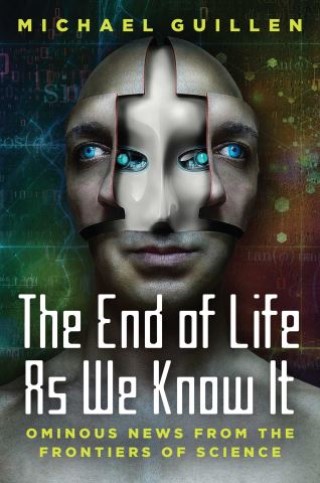 The End of Life as We Know It

Ominous News From the Frontiers of Science

"It's happening this second. Scientists are re-imagining and re-engineering the world forever. With brutal honesty and engaging story-telling, Michael Guillen gives us a clear-eyed look at a future that is already here. Consider this unsettling, brilliantly written, must-read book your official wake up call."  -- ERIC METAXAS, #1 national bestselling author of Bonhoeffer: Pastor, Martyr, Prophet, Spy

"Michael Guillen has tackled an important subject in The End of Life as We Know It... This book is a sobering look at where we could be headed. A fascinating read." -- DAVID LIMBAUGH, bestselling author of Jesus is Risen and The True Jesus

In all aspects of life, humans are crossing lines of no return.

Modern science is leading us into vast uncharted territory—far beyond the invention of nuclear weapons or taking us to the moon.Today, in labs all over the world, scientists are performing experiments that threaten to fundamentally alter the practical character and ethical color of our everyday lives.

In The End of Life as We Know It: Ominous News from the Frontiers of Science, bestselling author and Emmy award winning science journalist Michael Guillen takes a penetrating look at how the scientific community is pushing the boundaries of morality, including:

• Scientists who detached the head of a Russian man from his crippled, diseased body, and stitching it onto a healthy new donated body.

• Fertility experiments aimed at allowing designer babies to be conceived with the DNA from three or more biological parents.

• The unprecedented politicization of science – for example, in the global discussion about climate change that is pitting “deniers” against “alarmists” and inspiring Draconian legislation, censorship, and legal prosecutions.

• The integration of Artificial Intelligence into communications and the economy.

The End of Life as We Know It takes us into labratories and boardrooms where these troubling advances are taking place and asks the question no scientists seem to be asking:

What does this mean for the future of humanity?

“Guillen knows how to tell a story.” — Wall Street Journal

Michael Guillen: Michael Guillen was born in East Los Angeles, earned his B.S. from UCLA and his M.S. and Ph.D. from Cornell University in physics, mathematics, and astronomy. For eight years he was an award-winning physics instructor at Harvard University. For fourteen years he was the Emmy-award-winning science correspondent for ABC News, appearing regularly on Good Morning America, 20/20, Nightline, and World News Tonight. Dr. Guillen is the host of the History Channel series, Where Did It Come From? and producer of the award-winning family movie, Little Red Wagon. He is also the president/CEO of Spectacular Science Productions, a sought-after public speaker, and the bestselling author of several books, including two critically acclaimed books for the general public about mathematics: Bridges to Infinity and Five Equations That Changed the World.