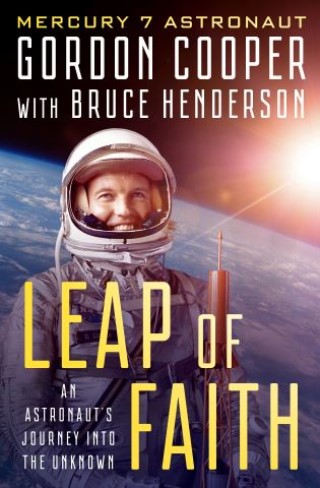 An Astronaut's Journey Into the Unknown

Gordon “Gordo” Cooper was one of the original Mercury Seven astronauts, pilot for Apollo X, head of flight crew operations for the United States’ first orbiting space station, and the last American to venture into space alone. Stretching from the dawning days of NASA to the far reaches of the unknown, Cooper’s distinguished career as a record-setting astronaut helped shape America’s space program and blazed a trail for generations to come.

In this astonishing memoir—written with #1 New York Times bestseller Bruce Henderson—Cooper crosses paths with such aviation luminaries as Amelia Earhart, Wiley Post, and German rocket scientist Wernher von Braun; he shares his early days at Edwards Air Force Base and the endeavors that became the basis for The Right Stuff; he takes us inside NASA with candid accounts of his defeats and accomplishments; he reflects on the triumphs and tragedies of his heroic colleagues; and he finally reveals the reasons behind his belief in extraterrestrial intelligence, including the US military’s long-standing UFO cover-ups.

Buckle yourself in for a breathtaking ride because in Leap of Faith, Gordon Cooper takes readers to places they’ve never been before.

Gordon Cooper:
Leroy Gordon “Gordo” Cooper Jr. (1927–2004) was an aerospace engineer and air force pilot who became one of the seven original astronauts in Project Mercury, the United States’ first manned space program. In 1963 he piloted the final Mercury spaceflight and was the last American to fly an entirely solo orbital mission. Two years later Cooper served as command pilot of Gemini 5 on an eight-day mission alongside astronaut Pete Conrad. In 1970, having flown 222 hours in space, he retired from NASA and the air force at the rank of colonel.

After leaving NASA, Cooper served on numerous corporate boards and was a technical consultant in such fields as high-performance boat design, construction, and energy. He also worked for the Walt Disney Company as vice president of research and development for Epcot. His hobbies included deep-sea salvaging and designing aircraft inspired by the UFOs he observed and studied during his career as a pilot and astronaut.

Bruce Henderson is the author of more than twenty nonfiction books, which have been published in a dozen countries. His #1 New YorkTimes bestseller And the Sea Will Tell was made into a television miniseries. Among his other books are Sons and Soldiers: The Unknown Story of the Jews Who Escaped the Nazis and Returned with the U.S. Army to Fight Hitler; Hero Found: The Greatest POW Escape of the Vietnam War; and Trace Evidence: The Hunt for the I-5 Serial Killer.