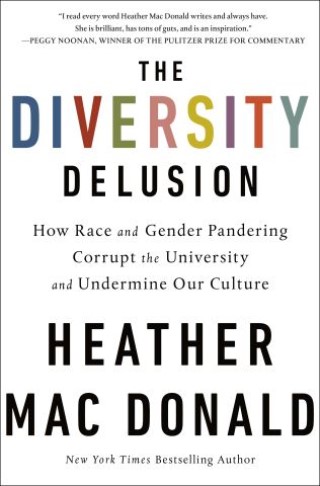 By the New York Times bestselling author: a provocative account of the attack on the humanities, the rise of intolerance, and the erosion of serious learning

America is in crisis, from the university to the workplace. Toxic ideas first spread by higher education have undermined humanistic values, fueled intolerance, and widened divisions in our larger culture. Chaucer, Shakespeare and Milton? Oppressive. American history? Tyranny. Professors correcting grammar and spelling, or employers hiring by merit? Racist and sexist. Students emerge into the working world believing that human beings are defined by their skin color, gender, and sexual preference, and that oppression based on these characteristics is the American experience. Speech that challenges these campus orthodoxies is silenced with brute force.

The Diversity Delusion argues that the root of this problem is the belief in America’s endemic racism and sexism, a belief that has engendered a metastasizing diversity bureaucracy in society and academia. Diversity commissars denounce meritocratic standards as discriminatory, enforce hiring quotas, and teach students and adults alike to think of themselves as perpetual victims. From #MeToo mania that blurs flirtations with criminal acts, to implicit bias and diversity compliance training that sees racism in every interaction, Heather Mac Donald argues that we are creating a nation of narrowed minds, primed for grievance, and that we are putting our competitive edge at risk.

But there is hope in the works of authors, composers, and artists who have long inspired the best in us. Compiling the author’s decades of research and writing on the subject, The Diversity Delusion calls for a return to the classical liberal pursuits of open-minded inquiry and expression, by which everyone can discover a common humanity.

Heather Mac Donald: Heather Mac Donald is the national bestselling author of The War on Cops, the Thomas W. Smith Fellow at the Manhattan Institute, and a contributing editor of City Journal. A former aspiring academic with roots in deconstruction and postmodernism, she has been the target of violent student protest for her work on policing. She holds a B.A. from Yale and an M.A. from Cambridge in English, and a J.D. from Stanford. Her writings have appeared in The Wall Street Journal, The Washington Post, The New York Times, The New Republic, and Partisan Review, among other publications. She lives in New York.