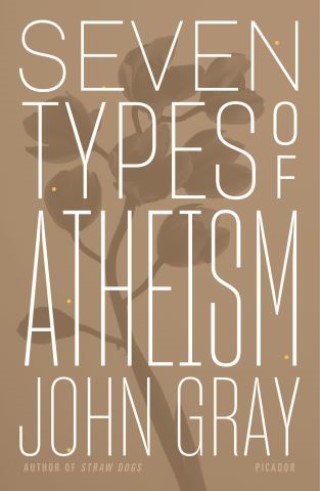 From the provocative author of Straw Dogs comes an incisive, surprising intervention in the political and scientific debate over religion and atheism

When you explore older atheisms, you will find that some of your firmest convictions—secular or religious—are highly questionable. If this prospect disturbs you, what you are looking for may be freedom from thought.

For a generation now, public debate has been corroded by a shrill, narrow derision of religion in the name of an often vaguely understood “science.” John Gray’s stimulating and enjoyable new book, Seven Types of Atheism, describes the complex, dynamic world of older atheisms, a tradition that is, he writes, in many ways intertwined with and as rich as religion itself.

Along a spectrum that ranges from the convictions of “God-haters” like the Marquis de Sade to the mysticism of Arthur Schopenhauer, from Bertrand Russell’s search for truth in mathematics to secular political religions like Jacobinism and Nazism, Gray explores the various ways great minds have attempted to understand the questions of salvation, purpose, progress, and evil. The result is a book that sheds an extraordinary light on what it is to be human.

John Gray: John Gray is the author of many critically acclaimed books, including The Silence of Animals, The Immortalization Commission, Black Mass, and Straw Dogs. A regular contributor to The New York Review of Books, he has been a professor of politics at Oxford, a visiting professor at Harvard and Yale, and a professor of European thought at the London School of Economics. He now writes full-time.