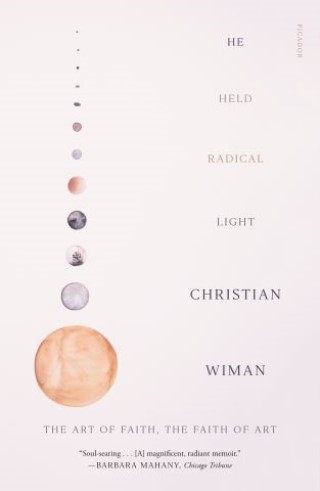 The Art of Faith, the Faith of Art

A moving meditation on memory, oblivion, and eternity by one of our most celebrated poets

What is it we want when we can’t stop wanting? And how do we make that hunger productive and vital rather than corrosive and destructive? These are the questions that animate Christian Wiman as he explores the relationships between art and faith, death and fame, heaven and oblivion. Above all, He Held Radical Light is a love letter to poetry, filled with moving, surprising, and sometimes funny encounters with the poets Wiman has known. Seamus Heaney opens a suddenly intimate conversation about faith; Mary Oliver puts half of a dead pigeon in her pocket; A. R. Ammons stands up in front of an audience and refuses to read. He Held Radical Light is as urgent and intense as it is lively and entertaining—a sharp sequel to Wiman’s earlier memoir, My Bright Abyss.

Christian Wiman: Christian Wiman is the author of several books, including a memoir, My Bright Abyss: Meditation of a Modern Believer (FSG, 2013); Every Riven Thing (FSG, 2010), winner of the Ambassador Book Award in poetry; Once in the West (FSG, 2014), a National Book Critics Circle Award finalist in poetry; and Stolen Air: Selected Poems of Osip Mandelstam. He teaches religion and literature at the Yale Institute of Sacred Music and Yale Divinity School.