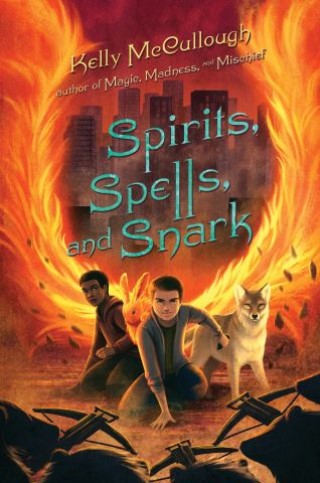 In Spirits, Spells, and Snark--the middle-grade sequel to Kelly McCullough's Magic, Madness, and Mischief--a 13-year-old boy and his snarky fire hare familiar must use his new magical powers to rescue his long-lost father in a magical version of St. Paul.

Kalvan Monroe is worried. Every story he’s ever read told him things should be better now. He mastered his magic, defeated his evil stepfather, and freed the land. Everything should be good now. But in breaking the Winter King's power, he also broke the spell that helped his mother keep her grip on reality.

Basically . . . things at home aren’t great. And it turns out that the magical powers that be aren’t done with him yet. So, he’s also dealing with that. And the constant attempts on his life. And, oh yeah, there’s school, too. Not to mention that the Earth itself is talking to him . . .

Is it too late for him to just give up and hide under the bed?

Praise for Magic, Madness, and Mischief:
"The author excels at introducing magic into the everyday modern world." —School Library Journal

"McCullough smoothly blends family drama, school story, and magical coming of age in this entertaining fantasy. ... Fans of Percy Jackson will be eager to hop into Kalvan’s world."—The Bulletin of the Center for Children's Books (BCCB)

Kelly McCullough: Kelly McCullough is the author of Magic, Madness, and Mischief, School for Sidekicks and two adult fantasy series, Webmage and Fallen Blade. He lives in Wisconsin with his physics professor wife and a small herd of cats, all of whom he adores.