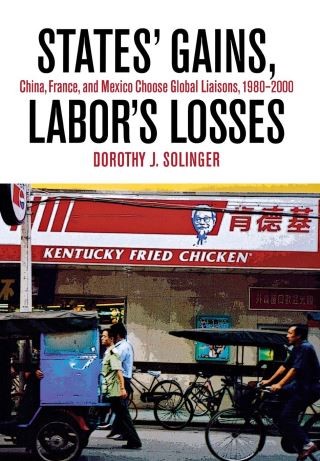 In this explicitly comparative work, Dorothy J. Solinger examines the effects of global markets on the domestic politics of major states. In the late 1970s, leaders around the world faced a need both to continue productive investment and to cut labor costs to compete internationally in a changed world market. To accommodate forces seemingly beyond their control, they often opted to reduce social protections and benefits that citizens had come to expect, in the process recalibrating their established political-economic coalitions. For countries whose governance was built on a coalition between workers and the state, the political conundrum was particularly intense.

States' Gains, Labor's Losses concentrates on three countries—China, France, and Mexico—where revolution-inspired political compacts between labor and the state had to be renegotiated. In all three cases, choices to forge a deepened dependence on international capital markets required the ruling parties to fire large numbers of workers and cut social benefits while attempting not to provoke widespread social unrest or even full-scale revolt among their supporters. China, France, and Mexico also shared strong legacies of protectionism and state intervention in the economy, so the decision of each to join a supranational economic organization (France and the EU, China and the GATT/WTO, Mexico and NAFTA) in the hope of alleviating crises of capital shortage involved submission to a new set of liberal economic rules that further compromised their sociopolitical compacts.

Examining a fundamental question about the dynamics of globalization and worker protest through an innovative comparative perspective, States' Gains, Labor's Losses emphasizes the growing tensions and new compromises between the working class and their political leaders in the face of intense international economic pressures.