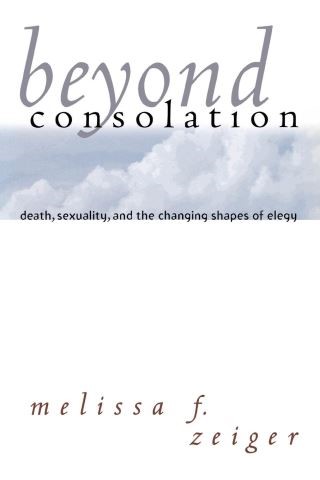 Death, Sexuality, and the Changing Shapes of Elegy

Using as her starting point the story of Orpheus and Eurydice, Melissa F. Zeiger examines modern transformations of poetic elegy, particularly as they reflect historical changes in the politics of gender and sexuality. Although her focus is primarily on nineteenth- and twentieth-century poetry, the scope of her investigation is grand: from John Milton's "Lycidas" to very recently written AIDS and breast cancer elegies. Milton epitomized the traditional use of the Orpheus myth as an illustration of the female threat to masculine poetic prowess, focused on the beleaguered Orpheus. Zeiger documents the gradual inclusion of Eurydice, from the elegies of Algernon Charles Swinburne through the work of Thomas Hardy and John Berryman, re-examining the role of Eurydice, and the feminine more generally, in poetic production. Zeiger then considers women poets who challenge the assumptions of elegies written by men, sometimes identifying themselves with Eurydice. Among these poets are H.D., Edna St. Vincent Millay, Anne Sexton, and Elizabeth Bishop. Zeiger concludes with a discussion of elegies for victims of current plagues, explaining how poets mourning those lost to AIDS and breast cancer rewrite elegy in ways less repressive, sacrificial, or punitive than those of the Orphean tradition. Among the poets discussed are Essex Hemphill, Thom Gunn, Mark Doty, Audre Lorde, Adrienne Rich, and Marilyn Hacker.