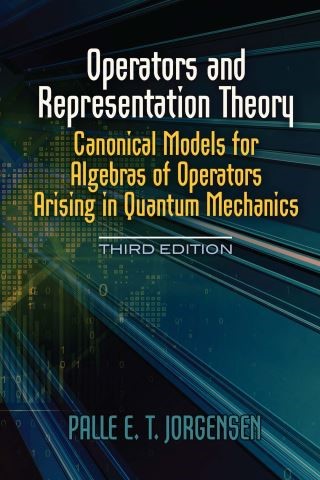 Canonical Models for Algebras of Operators Arising in Quantum Mechanics

Suitable for advanced undergraduates and graduate students in mathematics and physics, this three-part treatment of operators and representation theory begins with background material on definitions and terminology as well as on operators in Hilbert space. The introductory section concludes with a look at the imprimitivity theorem, which grounds in more mathematical language the work of Wigner on representations of the Poincaré and Galilei groups.
The second part of the monograph addresses the algebras of operators in Hilbert space, broadening the mathematics used in earlier versions of quantum theory. There are many examples in which the Hamiltonian, the operator that translates a quantum system in time, can be written as a polynomial in elements of an underlying Lie algebra. This section deals with properties of such operators. Part 3 explores covariant representation and connections, with a particular focus on infinite-dimensional Lie algebras. Connections to mathematical physics are stressed throughout the text, which concludes with three helpful appendixes, including a Guide to the Literature.