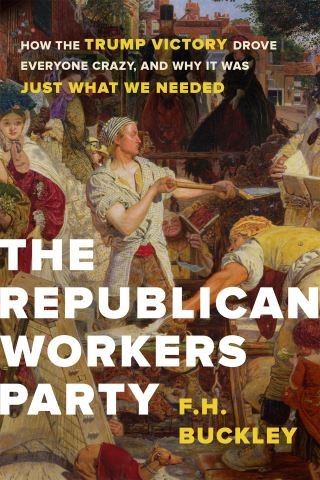 How the Trump Victory Drove Everyone Crazy, and Why It Was Just What We Needed

The Republican Workers Party is the future of American presidential politics, says F.H. Buckley. It’s a socially conservative but economically middle-of-the-road party, offering a way back to the land of opportunity where our children will have it better than we did. That is the American Dream, and Donald Trump’s promise to restore it is what brought him to the White House.

As a Trump speechwriter and key transition advisor, Buckley has an inside view on what “Make America Great Again” really means—how it represents a program to restore the American Dream as well as a defense of nationalism rooted in a sense of fraternity with all fellow Americans.

The call to greatness was a repudiation of the cruel hypocrisy of America’s New Class, the dominant 10 percent who deploy the language of egalitarianism while jealously guarding their own privileges. The New Class talks like Jacobins but behaves like Bourbons. Its members claim to support equality and social mobility, but resist the very policies that promote mobility and equality: a choice of good schools for everyone’s children, not just the well-to-do; a sensible immigration policy that doesn’t benefit elites at the expense of average Americans; and regulatory reform to trim back the impediments that frustrate competitive enterprise. It isn’t complicated. What’s been lacking is political will.

This book pulls no punches in describing how liberals and conservatives had become indifferent to those left behind. On the left, identity politics offered an excuse to hate an ideological enemy. On the right, a tired conservatism defined itself through policies that callously ignored the welfare of the bottom 90 percent. Trump told us that both Left and Right had betrayed the American people, and his Republican Workers Party promises to renew the American Dream. Buckley shows how it will do so.