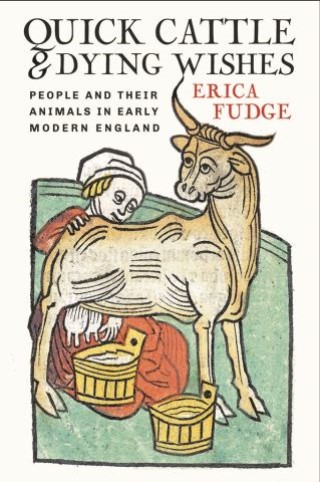 People and Their Animals in Early Modern England

What was the life of a cow in early modern England like? What would it be like to milk that same cow, day-in, day-out, for over a decade? How did people feel about and toward the animals that they worked with, tended, and often killed? With these questions, Erica Fudge begins her investigation into a lost aspect of early modern life: the importance of the day-to-day relationships between humans and the animals with whom they worked. Such animals are and always have been, Fudge reminds us, more than simply stock; they are sentient beings with whom one must negotiate. It is the nature, meaning, and value of these negotiations that this study attempts to recover.

By focusing on interactions between people and their livestock, Quick Cattle and Dying Wishes restores animals to the central place they once had in the domestic worlds of early modern England. In addition, the book uses human relationships with animals—as revealed through agricultural manuals, literary sources, and a unique dataset of over four thousand wills—to rethink what quick cattle meant to a predominantly rural population and how relationships with them changed as more and more people moved to the city. Offering a fuller understanding of both human and animal life in this period, Fudge innovatively expands the scope of early modern studies and how we think about the role that animals played in past cultures more broadly.