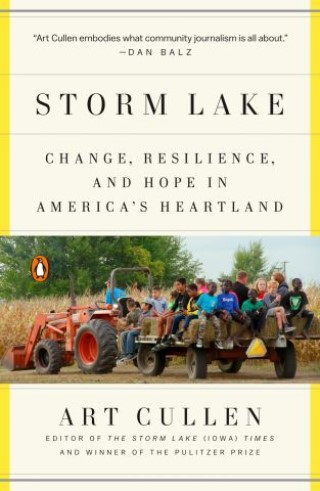 "A reminder that even the smallest newspapers can hold the most powerful among us accountable."—The New York Times Book Review

Iowa plays an outsize role in national politics. Iowa introduced Barack Obama and voted bigly for Donald Trump. But is it a bellwether for America, a harbinger of its future? Art Cullen’s answer is complicated and honest. In truth, Iowa is losing ground. The Trump trade wars are hammering farmers and manufacturers. Health insurance premiums and drug prices are soaring. That’s what Iowans are dealing with, and the problems they face are the problems of the heartland.

In this candid and timely book, Art Cullen—the Storm Lake Times newspaperman who won a Pulitzer Prize for taking on big corporate agri-industry and its poisoning of local rivers—describes how the heartland has changed dramatically over his career. In a story where politics, agri­culture, the environment, and immigration all converge, Cullen offers an unsentimental ode to rural America and to the resilient people of a vibrant community of fifteen thousand in Northwest Iowa, as much sur­vivors as their town.

Art Cullen: Art Cullen is half the ownership and 25 percent of the news staff of The Storm Lake Times (founded by his brother John) and winner of the 2017 Pulitzer Prize for Editorial Writing for his editorials taking on corporate agribusiness for fouling the state's water and despoiling its soil. His commentaries on politics, immigration and the environment have been published by The New York Times, The Washington Post and The Guardian, along with regional newspapers and news sites. Cullen has been profiled by National Public Radio, Katie Couric, and CNN, and has served as a guest political analyst on MSNBC. This is his first book.