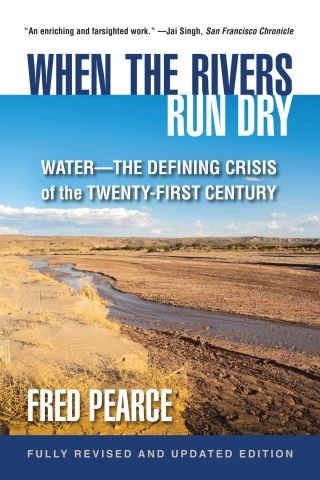 When the Rivers Run Dry, Fully Revised and Updated Edition

A new edition of the veteran science writer's groundbreaking work on the world's water crisis, featuring all-new reporting from the most recent global flashpoints

Throughout history, rivers have been our foremost source of fresh water for both agriculture and individual consumption, but looming water scarcity threatens to cut global food production and cause conflict and unrest. In this visionary book, Fred Pearce takes readers around the world on a tour of the world's rivers to provide our most complete portrait yet of the growing global water crisis and its ramifications for us all. With vivid on-the-ground reporting, Pearce deftly weaves together the scientific, economic, and historic dimensions of the water crisis, showing us its complex origins--from waste to wrong-headed engineering projects to high-yield crop varieties that have saved developing countries from starvation but are now emptying their water reserves. Pearce argues that the solution to the growing worldwide water shortage is more efficiency and a new water ethic based on managing the water cycle for maximum social benefit rather than narrow self-interest.

Fred Pearce: Fred Pearce is an award-winning author and journalist based in London. He has reported on environmental, science, and development issues from 85 countries over the past 20 years. An environment consultant at New Scientist magazine since 1992, he also writes regularly for the Guardian newspaper and Yale University’s prestigious e360 website. Pearce was voted UK Environment Journalist of the Year in 2001 and CGIAR agricultural research journalist of the year in 2002, and he won a lifetime achievement award from the Association of British Science Writers in 2011. His many books include Falllout, With Speed and Violence, Confessions of an Eco-Sinner, The Coming Population Crash, and The Land Grabbers.