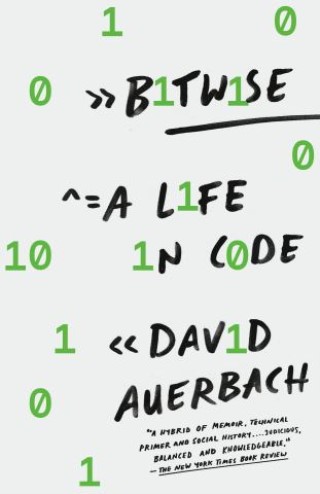 A Life in Code

An exhilarating, elegant memoir and a significant polemic on how computers and algorithms shape our understanding of the world and of who we are

Bitwise is a wondrous ode to the computer lan­guages and codes that captured technologist David Auerbach’s imagination. With a philoso­pher’s sense of inquiry, Auerbach recounts his childhood spent drawing ferns with the pro­gramming language Logo on the Apple IIe, his adventures in early text-based video games, his education as an engineer, and his contribu­tions to instant messaging technology devel­oped for Microsoft and the servers powering Google’s data stores. A lifelong student of the systems that shape our lives—from the psy­chiatric taxonomy of the Diagnostic and Statistical Manual to how Facebook tracks and profiles its users—Auerbach reflects on how he has experienced the algorithms that taxonomize human speech, knowledge, and behavior and that compel us to do the same.

Into this exquisitely crafted, wide-ranging memoir of a life spent with code, Auerbach has woven an eye-opening and searing examina­tion of the inescapable ways in which algo­rithms have both standardized and coarsened our lives. As we engineer ever more intricate technology to translate our experiences and narrow the gap that divides us from the ma­chine, Auerbach argues, we willingly erase our nuances and our idiosyncrasies—precisely the things that make us human.

David Auerbach: DAVID AUERBACH is a writer and software engineer who has worked for Google and Microsoft. His writing has ap­peared in The Times Literary Supplement, MIT Technology Review, The Nation, The Daily Beast, n+1, and Bookforum, among many other publications. He has lectured around the world on technology, literature, philosophy, and stupidity. He lives in New York City.