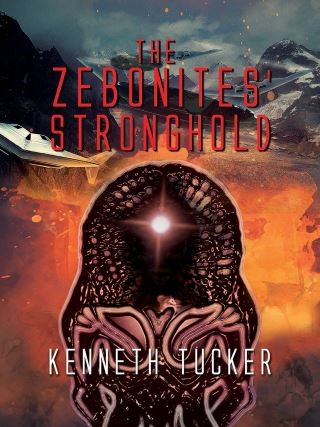 They came to decadent America, tottering toward insurrection: The Zebonites, beings from a distant star had promised astounding medical and scientific advances in exchange for allowing them to set up a military stronghold in Florida's Everglades. Excited by their promises humanity's advancementof, Joe Tanner applied for and was hired for the contact team, a small group of individuals who could gain access to and lead other into the Zebonite's stronghold. But the Zebonites kept themselves shrouded in mystery, not revealing their natures, communicating only through the Zugs, mutated servants, and robotic bugs. Soon the world learned that the alliance had not been a request, but an ultimatum. The Zebonites, moreover, the treated human beings with contempt, considering themselves superior. They sought to instill dread by torturing, killing, and, if necessary, destroying the minds of those who oppose them...

Kenneth Tucker: Dr. Kenneth Tucker was born December 2, 1940, in Louisville, Kentucky, in 1970 he received his Ph. D. from the University of Kentucky and was employed by Murray State University, he specialized in teaching Shakespeare and Literature of the english renaissance. He has written articles on diverse writers and continues to write reviews for The Shakespeare Newsletter. Upon retiring, Dr. Tucker has devoted himself to writing, producing Eliot Ness And The Untouchables And Shakespeare And Jungian Typology. Among his novels are a wilderness of tigers, based upon the savage rampage of Kentucky’s harpe brothers, the grave and the figure eight, a retelling of the Tristan-Isolde story set in Kentucky, and the fall of the house of spade, a tale of murder and revenge set in Western Kentucky. A Kentucky Colonel in King Arthur’s court is a very different sort of novel, a Comical Fantasy, as is its sequel a Kentucky Colonel in darkest Africa. Among his more recent books are hell is where the heart is, a spoof of University administrations; the Player Gods, a dark fantasy, combining the hardboiled detective novel with Dreamlike Bizarre events; and a Spider spinning daydreams, and other tales—bizarre, realistic, humorous and weird. A Kentucky Colonel in Wagner land completes the “Hal Morgan” or “The Kentucky Colonel Series” of comic fantasy novels. Tucker has long been intrigued by the career of eliot ness and the case of the mad butcher of Kingsbury run. He has dealt with both in his non-fiction book on ness and his novel The Familiar Compound Trickster—Eliot ness’s Most Dangerous Enemy.