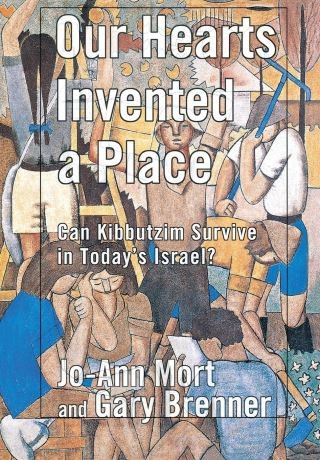 Our Hearts Invented a Place

Can Kibbutzim Survive in Today's Israel?

"We thought we were living in a society of the future, showing how people can live together in a way that the human being is not a product of society where you have to put somebody down so that you are up.... Suddenly we [find] that people want to be more like outside, and we are disappointed."

"When people say to me, 'We're so sorry to see what's going on in the kibbutzim because we are losing the most important thing that happened to the State of Israel,' I say to them, 'Listen....' The government lost interest in the kibbutz movement, and we had to find another way. The State of Israel slowly but surely became a normal state, and the pioneers finished their job. We are living in a new era. We have to make the adjustment."—from Our Hearts Invented a Place

One of the grand social experiments of modern time, the Israeli kibbutz is today in a state of flux. Created initially to advance Zionism, support national security, and forge a new socialist, communal model, the kibbutzim no longer serve a clear purpose and are struggling financially. In Our Hearts Invented a Place, Jo-Ann Mort and Gary Brenner describe how life on the kibbutz is changing as members seek to adapt to contemporary realities and prepare themselves for the future. Throughout, the authors allow the members' often-impassioned voices—some disillusioned, some optimistic, some pragmatic—to be heard.

"The founders [of the kibbutz] had a dream," an Israeli told the authors in one of many interviews they conducted between 2000 and 2002, "[which] they fulfilled... a hundred times." The current generation, he explains, must alter that dream in order for it to survive. After tracing the formidable challenges facing the kibbutzim today, Mort and Brenner compare three distinct models of change as exemplified by three different communities. The first, Gesher Haziv, decided to pursue privatization. The second, Hatzor, is diversifying its economy while creating an extensive social safety net and a system of private wages with progressive taxation. In the third instance, Gan Shmuel is attempting to hold on to the traditional kibbutz model.

In closing, the authors address the new-style urban kibbutz. Their book will provide readers with a deeper understanding of the kibbutz—and of Israel itself—during an era of dramatic social, economic, and political change.