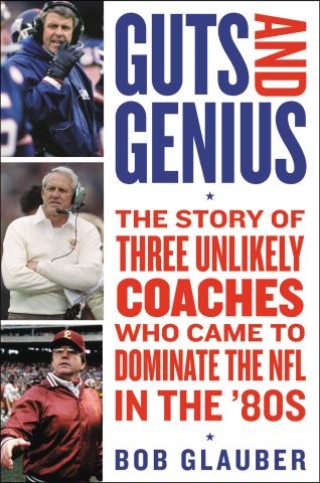 Bill Walsh, Joe Gibbs and Bill Parcells dominated what may go down as the greatest decade in pro football history, leading their teams to a combined eight championships and developing some of the most gifted players of all time in the process.

Walsh, Gibbs and Parcells developed such NFL stars as Joe Montana, Lawrence Taylor, Jerry Rice, Art Monk and Darrell Green. They resurrected the careers of players like John Riggins, Joe Theismann, Doug Williams, Everson Walls and Hacksaw Reynolds. They did so with a combination of guts and genius, built championship teams in their own likeness, and revolutionized pro football like few others. Their influence is still evident in today's game, with coaches who either worked directly for them or are part of their coaching trees now winning Super Bowls and using strategy the three men devised and perfected.

In interviews with more than 150 players, coaches, family members and friends, GUTS AND GENIUS digs into the careers of three men who overcame their own insecurities and doubts to build Hall of Fame legacies that transformed their generation and continue to impact today's NFL.