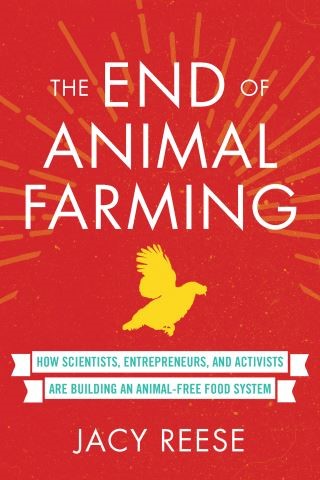 The End of Animal Farming

How Scientists, Entrepreneurs, and Activists Are Building an Animal-Free Food System

A bold yet realistic vision of how technology and social change are creating a food system in which we no longer use animals to produce meat, dairy, or eggs.

Michael Pollan’s The Omnivore’s Dilemma and Jonathan Safran Foer’s Eating Animals brought widespread attention to the disturbing realities of factory farming. The End of Animal Farming pushes this conversation forward by outlining a strategic roadmap to a humane, ethical, and efficient food system in which slaughterhouses are obsolete—where the tastes of even the most die-hard meat eater are satisfied by innovative food technologies like cultured meats and plant-based protein. Social scientist and animal advocate Jacy Reese analyzes the social forces leading us toward the downfall of animal agriculture, the technology making this change possible for the meat-hungry public, and the activism driving consumer demand for plant-based and cultured foods.

Reese contextualizes the issue of factory farming—the inhumane system of industrial farming that 95 percent of farmed animals endure—as part of humanity’s expanding moral circle. Humanity increasingly treats nonhuman animals, from household pets to orca whales, with respect and kindness, and Reese argues that farmed animals are the next step. Reese applies an analytical lens of “effective altruism,” the burgeoning philosophy of using evidence-based research to maximize one’s positive impact in the world, in order to better understand which strategies can help expand the moral circle now and in the future.

The End of Animal Farming is not a scolding treatise or a prescription for an ascetic diet. Reese invites readers—vegan and non-vegan—to consider one of the most important and transformational social movements of the coming decades.

Jacy Reese: Jacy Reese is the research director and cofounder of Sentience Institute, a nonprofit think tank researching the most effective strategies for expanding humanity’s moral circle. He previously served as board chair and a researcher at Animal Charity Evaluators. Reese’s writing has appeared in Vox, Salon, and the Huffington Post, and he has presented his research to academic and nonprofit audiences in fifteen countries.