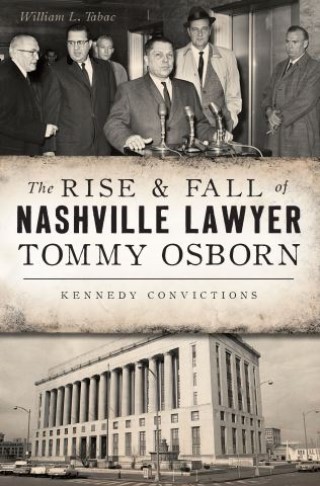 Tommy Osborn's star was rising. The young Nashville lawyer led a band of Tennessee reformers to victory in a landmark Supreme Court case. Hailed by Chief Justice Earl Warren as the most important of his career, Baker v. Carr's "one man, one vote" mandate revolutionized how Americans chose their representatives. Osborn was hired by Jimmy Hoffa to take on Bobby Kennedy for the fourth time. Unfortunately, the young lawyer met his match in Walter Sheridan, Kennedy's top aide and brilliant spymaster. Author William L. Tabac describes the extraordinary legal proceeding with the twists and turns of a modern television drama and the fall of a prominent attorney.

William L. Tabac: William L. Tabac is a practicing lawyer and emeritus professor of law at the Cleveland-Marshall College of Law of Cleveland State University. He has published articles on a wide variety of subjects in law journals and for the New York Times Sunday Magazine and the Cleveland Plain Dealer. He is the author of The Insanity Defense and the Mad Murderess of Shaker Heights: Examining the Trial of Mariann Colby (2018). He served as producer and host of The Law and You, an award-winning radio program, and as a legal commentator for WKYC-TV in Cleveland, Ohio.