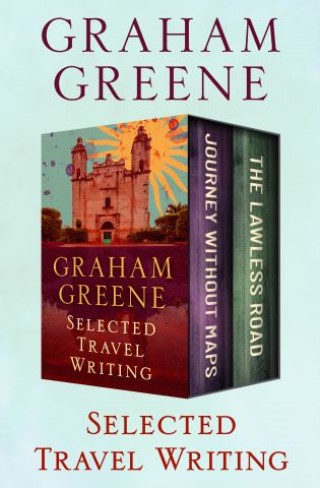 Journey Without Maps and The Lawless Roads

A pair of revelatory travel memoirs from “a superb storyteller . . . [who] had a talent for depicting local color” (The New York Times).

“One of the finest writers of any language,” British author Graham Greene embarked on two awe-inspiring and eye-opening journeys in the 1930s—to West Africa and to Mexico (The Washington Post). Greene would find himself both shaken and inspired by these trips, which would go on to inform his novels.

Journey Without Maps: When Graham Greene set off from Liverpool in 1935 for what was then an Africa unmarked by colonization, it was to leave the known transgressions of his own civilization behind for those unknown. First by cargo ship, then by train and truck through Sierra Leone, and finally on foot, Greene embarked on a dangerous and unpredictable 350-mile, four-week trek through Liberia with his cousin and a handful of servants and bearers into a world where few had ever seen a white man. For Greene, this odyssey became as much a trip into the primitive interiors of the writer himself as it was a physical journey into a land foreign to his experience.

“One of the best travel books [of the twentieth] century.” —The Independent

The Lawless Roads: This eyewitness account of religious and political persecution in 1930s Mexico inspired The Power and the Glory, the British novelist’s “masterpiece” (John Updike). In 1938, Greene, a burgeoning convert to Roman Catholicism, was commissioned to expose the anticlerical purges in Mexico. Churches had been destroyed, peasants held secret masses in their homes, religious icons were banned, and priests disappeared. Traveling under the growing clouds of fascism, Greene was anxious to see for himself the effect it had on the people. Journeying through the rugged and remote terrain of Chiapas and Tabasco, Greene’s emotional, gut response to the landscape; the sights and sounds; the oppressive heat; and the people’s fear, despair, resignation, and fierce resilience makes for a vivid and powerful chronicle.

Graham Greene:
Graham Greene (1904–1991) is recognized as one of the most important writers of the twentieth century, achieving both literary acclaim and popular success. His best known works include Brighton Rock, The Heart of the Matter, The Quiet American, and The Power and the Glory. After leaving Oxford, Greene first pursued a career in journalism before dedicating himself full-time to writing with his first big success, Stamboul Train. He became involved in screenwriting and wrote adaptations for the cinema as well as original screenplays, the most successful being The Third Man. Religious, moral, and political themes are at the root of much of his work, and throughout his life he traveled to some of the wildest and most volatile parts of the world, which provided settings for his fiction. Greene was a member of the Order of Merit and a Companion of Honour.