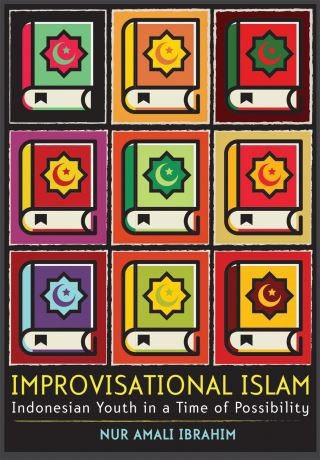 Indonesian Youth in a Time of Possibility

Improvisational Islam is about novel and unexpected ways of being Muslim, where religious dispositions are achieved through techniques that have little or no precedent in classical Islamic texts or concepts. Nur Amali Ibrahim foregrounds two distinct autodidactic university student organizations, each trying to envision alternative ways of being Muslim independent from established religious and political authorities. One group draws from methods originating from the business world, like accounting, auditing, and self-help, to promote a puritanical understanding of the religion and spearhead Indonesia’s spiritual rebirth. A second group reads Islamic scriptures alongside the western human sciences. Both groups, he argues, show a great degree of improvisation and creativity in their interpretations of Islam.

These experimental forms of religious improvisations and practices have developed in a specific Indonesian political context that has evolved after the deposal of President Suharto’s authoritarian New Order regime in 1998. At the same time, Improvisational Islam suggests that the Indonesian case study brings into sharper relief processes that are happening in ordinary Muslim life everywhere. To be a practitioner of their religion, Muslims draw on and are inspired by not only their holy scriptures, but also the non-traditional ideas and practices that circulate in their society, which importantly include those originating in the West. In the contemporary political discourse where Muslims are often portrayed as uncompromising and adversarial to the West and where bans and walls are deemed necessary to keep them out, this story about flexible and creative Muslims is an important one to tell.